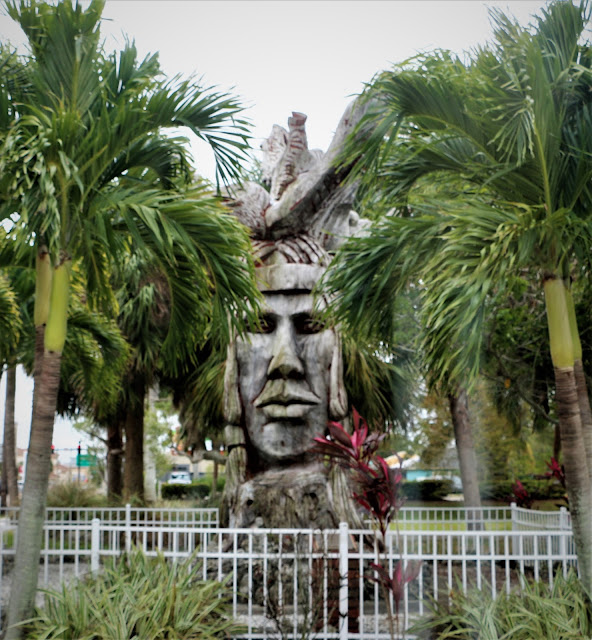 The face that looms mysterioulsy from behind the palm trees on Retta Esplanade has a long history.

In 1974 Fred Babcock had just built a Holiday Inn  where the PG Hotel and Hurricane Charleys are today.   Mr. Babcock, owner of the huge Babcock Ranch (known as the Crescent-B) was a winter resident of Punta Gorda and president of the Babcock Lumber Company headquartered in Pittsburgh.

After buying the waterfront property that had been owned by Perry and Marion McAdow  in the 1890s and which later had become the Bayview Inn, he noticed a dead tree on his acquired land. The tree was “monkey pod” or “ear” tree imported from the Orient as a sapling by Marian McAdow in 1898. Marion sought many exotic plants to bring to her new home in Punta Gorda and  is credited for much of the tropical ambience that town has today.

Babcock recalled that a renown sculptor, Peter Toth, was developing a series of works called Whispering Giants across the county, and decided to commission Toth to sculpt a statue from the tree’s wood for $10,000.

Toth had completed his first monumental sculpture, a stone Indian head, carved from a cliff in La Jolla, California in 1972.  By that summer he had switched from stone to wood, and made a decision to make a sculpture of an Indian, to honor them, in each of the fifty states.  Calostimucu was his tenth project, and the only one with two faces – on one side a male, on the other a maiden.  Each has a symbolic animal coming from their heads, the male has a bison, the maiden, an eagle. The name of the statue is a combination of the two Native American tribes that lived in this area of Florida. Toth completed his goal of a whispering giant statue in each of the fifty states in May 1988.

Calostimucu, the Punta Gorda statue, was a fixture in front of the Best Western (formerly Holiday Inn) until Hurricane Charley destroyed much of the hotel in 2004.  New owners of the property wanted to replace the statue with a fountain, and for a time there was controversy over its disposition until it was finally moved in front of the relocated Freeman House right across the street, where it stands today.